Canada police kill Ottawa shooter on Parliament ( related by all media , including Hill Deutsche Welle Earlier Wednesday), a gunman shot and wounded a Canadian soldier standing guard at the National War Memorial in Ottawa, and then entered parliament, where as many as 30 shots rang out, police and witnesses said.

The RCMP is investigating 63 national security cases linked to terrorism and involving 90 suspects, Canada’s top security officials said Wednesday, just one day after the House of Commons voted to go to war against radical jihadists. OTTAWA, Ontario (AP) — A masked gunman killed a soldier standing guard at Canada’s war memorial Wednesday, then stormed Parliament in an attack that was stopped cold when he was shot to death by the ceremonial sergeant-at-arms. Canada’s prime minister called it the country’s second terrorist attack in three days.

Unfolding just before 10 a.m., while lawmakers were meeting in caucus rooms, the assault rocked Parliament over and over with the boom of gunfire, led MPs to barricade doors with chairs and sent people streaming from the building in fear. Harper was addressing a caucus when the attack began outside the door, but he safely escaped. Investigators are saying little about the gunman, identified as 32-year-old petty criminal Michael Zehaf-Bibeau. A government official told The Associated Press that Zehaf-Bibeau was a recent convert to Islam. OTTAWA SHOOTING
Ottawa gunman identified as 32-year-old Michael Zehaf-Bibeau
Ottawa shooter apparently had criminal past in Quebec, was repeatedly brought in on drug charges
Although Canadian police have not released the name of the Ottawa shooter, on Wednesday afternoon U.S. sources leaked that the suspect’s name is Michael Zehaf Bibeau, a 32-year-old Canadian who was a recent convert to Islam.

Bibeau’s name was first broadcast by CBS, allegedly via U.S. intelligence sources who had been in contact with their Canadian counterparts.

Later, Reuters also cited U.S. sources in confirming Bibeau was a recent convert to Islam and may have been born with the name Michael Joseph Hall.

The suspect—who was reportedly born and raised in Quebec—has a lengthy criminal past in Montreal, Aylmer, QC and British Columbia.

A Zehaf-Bibeau resided in Montreal’s Villeray-Saint Michel-Park Extension borough between 2004 and 2006.

His most recent court record indicates Zehaf-Bibeau fell off the map for three years, as far as the Montreal courthouse was concerned, because he failed to show up in court on a simple marijuana charge that had been filed against him on March 14, 2006.

He turned up in court more than three years later, on Dec. 12, 2009, to plead guilty to the charge. As part of his sentence he was granted an absolute discharge. (Under that charge the man was charged and convicted under the name Michael Bibeau-Zehaf.)

His most serious conviction came on Dec. 7, 2004, when Zehaf-Bibeau pleaded guilty to possession of phencyclidine, also known as PCP, and was sentenced to a 60-day prison term.

On the same day, he also pleaded guilty to marijuana possession and was sentenced to one day in prison. He has also been convicted for failing to comply with conditions of a release.

In court records related to another charge for breach of conditions, Zehaf-Bibeau listed his address as being in Aylmer, QC, a city of 40,000 just 23 minutes west of Downtown Ottawa.

And, just two years ago, Bibeau was on the West Coast. My fellow Canadians, for the second time this week there has been a brutal and violent attack on our soil.

Today, our thoughts and prayers are with the family and friends of Corporal Nathan Cirillo of the Argyll and Sutherland Highlanders of Canada.

That sacred place that pays tribute to those who gave their lives so that we can live in a free, democratic and safe society.

Likewise, our thoughts and prayers remain also with the family and friends of Warrant Officer Patrice Vincent, who was killed earlier this week by an ISIL-inspired terrorist.

Tonight we also pray for the speedy recovery of the others injured in these despicable attacks.

Fellow Canadians, we have also been reminded today of the compassionate and courageous nature of so many Canadians.

Like those private citizens and first responders who came to provide aid to Corporal Cirillo as he fought for his life.

And of course the members of our security forces in the RCMP, the City of Ottawa Police, and in Parliament who came quickly, and at great risk to themselves, to assist those of us who were close to the attack.

Fellow Canadians, in the days to come, we will learn more about the terrorist and any accomplices he may have had.

But this week’s events are a grim reminder that Canada is not immune to the types of attacks we have seen elsewhere around the world.

On our values, on our society, on us, Canadians, as a free and democratic people who embrace human dignity for all.

But let there be no misunderstanding.

We will not be intimidated.

Canada will never be intimidated.

In fact, this will lead us to strengthen our resolve and redouble our efforts and those of our national security agencies to take all necessary steps to identify and counter threats, and keep Canada safe here at home.

Just as it will lead us to strengthen our resolve and redouble our efforts to work with our allies around the world and fight against the terrorist organizations who brutalize those in other countries with the hope of bringing their savagery to our shores.

They will have no safe haven.

While today has been, without question, a difficult day, I have every confidence that Canadians will pull together with the kind of firm solidarity that has seen our country through many challenges.

Together, we will remain vigilant against those at home or abroad who wish to harm us.

For now, Laureen, Ben, Rachel and I join all Canadians in praying for those touched by today’s attack.

May God bless them, and keep our land glorious and free. 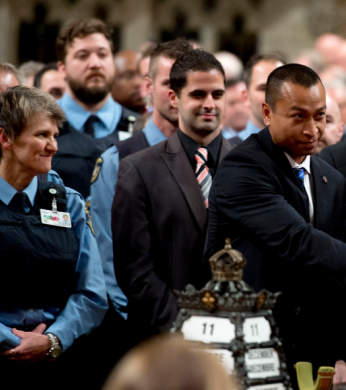 Sargeant-at-Arms Kevin Vickers, the guy who eventually ended October’s attack by eliminating the armed guy who had actually stormed the structure, was there, of course, and was honoured. Thursday’s event likewise honoured another Canadian whose name is worth keeping in mind: Samearn Son, a constable in the House of Commons security force. Thursday’s event assisted correct that, something we are grateful for.

On Thursday, an event was held in our home of Commons to honour the security personnel that safeguard Parliament Hill every day. These obscure however hard-working gatekeeper, obviously, pertained to nationwide attention after the terrorist attack on Parliament Hill in Vancouver. The event on Thursday was a touching and welcome minute where our chosen officials revealed appreciation to those who work to keep them safe.